Understanding the aspects of sleep and significance of dreams.

All people dream. Dreams, or the manifestations of dreaming – rapid eye movements (REMs), begin even before we are born and we continue to dream, usually between two to five times a night until we die. We forget almost all our dreams. Dreams can be fantastic, pleasant, frightening or mediocre, and reactions to them can be violent. Previous blogs have highlighted the sometimes violent nature of dreams. Dreams have been the stuff of philosophers, artists, writers, scientists, and therapists. Each of my books about sleep have sections about dreams. Scientists have shown us that REM sleep (when we dream) occurs in all animals studied to date and when we dream, our bodies enter a different physical state—we are paralyzed, and many body systems work differently. Our breathing and heartbeats can become erratic, for example.

Although many assume that the study of dreams began sometime in the last century, perhaps related to the introduction of psychoanalysis, this is not the case. For example, Aristotle wrote about dreams as early as 325 B.C.

In 54 B.C. Cicero in De re publica describes the Dream of Scipio. Scipio Aemilianus (the general who conquered Carthage in 146 B.C.) falls asleep and is visited in a dream by his grandfather (Scipio Africanus, the general who defeated Hannibal). In the dream, which includes images of the earth from above the universe and stars, the grandfather predicts that his grandson will defeat Carthage.

Somnium, an enigmatic mysterious dream requiring interpretation; think Freud and psychoanalyisis
Visio, a prophetic vision that predicts a future that comes true; think Jacob’s Dream in the Bible
Oraculum, prophetic dream in which an authority figure plays a role; think of the visions of Joan of Arc in which three saints instruct her to recover France from the English.
Insomnium, a nightmare or false or disturbing dream caused by a pathological condition; think the repetitive nightmares of PTSD
Visum, a nightmare that include apparitions and contact with supernatural beings; think Scrooge’s journeys into the past and future in Dickens’ Christmas Carol.

People in the process of dying have dreams and visions that have recently become topics for scientific research.

Visual artists have painted glorious images about dreams. These artists include Pablo Picasso, Henri Matisse, (1) Henri Rousseau (2) and many, many others, all of whom created a painting called The Dream. The images typically show a person sleeping in the foreground, presumably dreaming and at times, the rest of the image might represent the content of that person’s dream. Artists may also paint only the contents of a dream or nightmare (e.g. the fantastic jungle images of Rousseau.) Johannes Vermeer’s painting, A Maid Asleep, is gorgeous and has a prominent place on my book website.

How do you think about dreams, your’s other’s, and/or depictions of others? Like the wonderful diversity of dreams, there is a diversity in thinking about dreams. There may not be a right answer. Just as a therapist might try to tease the “meaning” and significance of a person’s description of a dream, one may try to understand an image about a dream. Following is an example based on the painting accompanying this blog post:

This painting is from a gallery which was part of an art school in Chongqing, China. The artist remains unknown despite contacts with the art school and artists in Chongqing and art experts in the US. 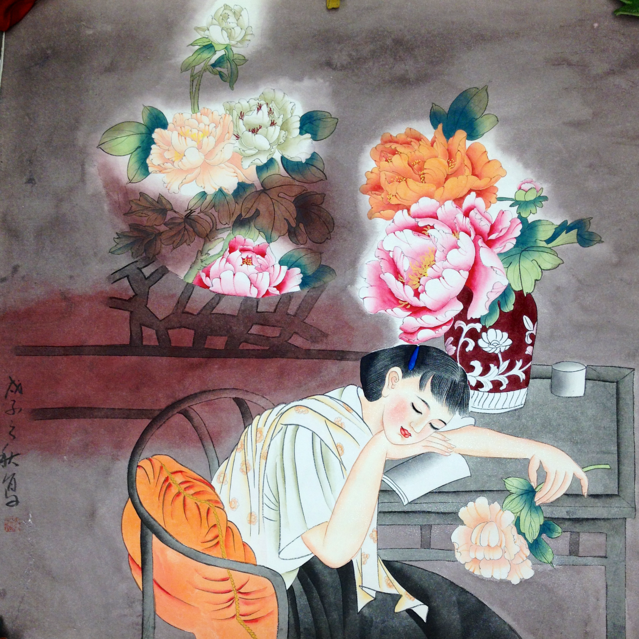 The picture shows so many wonderful aspects about sleep. It is a fluid story that tells us that before she fell asleep, the woman was reading and relaxed, admiring the peony in her hand (perhaps sent by a lover). The flower and the hand are dropping; she must now be in REM sleep (REM atonia). Her dream consists of images of peonies that are floating upwards from the real vase. The color of one of the flowers is the same as her cushion, which suggests a connection to reality. Daytime experiences can influence dreams (“Continuity hypothesis.”) (3) One can interpret or over-interpret such a picture and the dream. Freud interpreted a similar dream (From The Interpretation of Dreams, 1900, Chapter 6, Part 2, “The Dream-Work.”)

The Dream: “I arrange the center of a table with flowers for a birthday. On being questioned she states that in the dream she seemed to be at home (she has no home at the time) and experienced a feeling of happiness.”

The Interpretation: “The popular symbolism enables me to translate the dream for myself. It is the expression of her wish to be married. The table, with the flowers in the centre, is symbolic of herself and her genitals. She represents her future fulfilled, inasmuch as she is already occupied with the thoughts of the birth of a child, so the wedding has taken place long ago.”