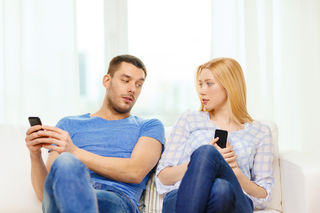 While waiting for a table at a busy restaurant the other day, I witnessed a man angrily banging away on his phone. This well-dressed man in a charming suit had a grimace on his face and would pause to look at his phone and then proceed to angrily type, pausing again to look at his phone and then bitterly typing again—with each interval increasing in visual upset. It appeared that he was involved in a text war.

That means that when these texts start escalating our frustration, we are basing our reaction on limited—very limited—information. Worse, people tend to dig their heels about what they’ve interpreted because they read the actual words written. This tendency makes repairing a misunderstanding next to impossible if the person isn’t open to realizing that misunderstandings occur.

So, this is first thing that anyone who texts needs to understand—misunderstandings occur in text. In fact, text is probably the worst form of communication to rely on when building a relationship.

Which brings me to Rule #1 for texting—Don’t rely on texting as your main communication vehicle in your relationship. Let it augment and support your relationship, but don’t let it be the main form.

If your relationship begins to get out of balance because you’ve only been texting, then immediately plan some face time. This is true for professional as well as intimate relationships. (Note: If you are dating and begin a relationship with text, getting very deep before recognizing that a relationship in person may need to develop as well, don’t be surprised if you could be close when texting but feel awkward in person.)

2. The moment a clash becomes evident in texting, try to stop and ask if both of you can talk in person (or on phone if that’s the only option).

Share that you’re concerned a misunderstanding is occurring. Of course, sometimes people don’t want to talk. They’re too upset or embroiled in the heat of the moment. Their defensiveness is on high alert, so a text war ensues. Hopefully the relationship is strong enough that it can stand up to a few hiccups from inevitable text disputes.

It’s not a good way to test your relationship’s resilience, though—because the small crack of mistrust that breeds in such heated exchanges can eventually grow and sink the whole relationship.

When you start defending yourself and/or your actions, the relationship is in danger. Seek understanding and attempt to have a conversation that allows for mutual understanding. Defensiveness usually indicates that we feel threatened and have a level of mistrust; the words that leave us in defensive moments generally tend to put up such a wall that the other person becomes just as defensive. I compare it to pulling out the ego defense guns. Once we pull ours out, the other person tends to do the same. In such a stand-off, someone must stop the escalation and put up the white flag to enable repair. (Putting up the peaceful surrender flag in this situation is actually a sign of maturity, not losing.)

John Gottman refers to the four horseman of the apocalypse for relationships—criticism, contempt, defensiveness, and stonewalling. This holds true even more so when texting. Ego defense guns are firing the minute blaming and criticizing begin. Most likely, the other person will shoot back when shot at—which escalates the exchange into the worst of the defensive maneuvers—silent treatment, or the end of the relationship.

5. Don’t let too much time pass before repairing a disruption.

Misunderstandings aren’t necessarily bad on their own; it’s all about how people repair them. A relationship is in danger when the silent treatment follows a text war. Sometimes a healthy and strong relationship can handle a time-out, but ignoring someone altogether turns a crack into an irreparable hole.

As stated above, most communication relies on nonverbal cues—facial expressions, tone of voice, etc. Context is crucial and most people outside of a relationship do not have intimate knowledge of the other person and your personal relationship. They also can’t see the person or understand their personal context, so they are liable to misinterpret their message as well—leading to multiple people infiltrating the relationship with biased points of view and potentially leading the person farther from critical relationship repair.

7. When all else fails, try to find humor and light in all exchanges.

Don’t over-focus on meaning and intent. Instead, err on the side of humor and give the benefit of the doubt.

In the words of the Nobel Prize-winning author Isaac Bashevis Singer, “Sometimes love is stronger than a man’s convictions…(and)…[t]he waste basket is a writer’s best friend.”